Vegan kebab doesn't work? It does and that is really more than tasty! This kebab is prepared with Seitan Fix. I was looking for a good, vegan kebab alternative that is easy to prepare myself. Since we still have about 2kg of Seitan Fix here (no joke, it was only available in bulk packs at Christmas time), I thought that I could use it after all. Thought, done. It only took me half a year before I dared to prepare seitan. And it's much less difficult than I thought. 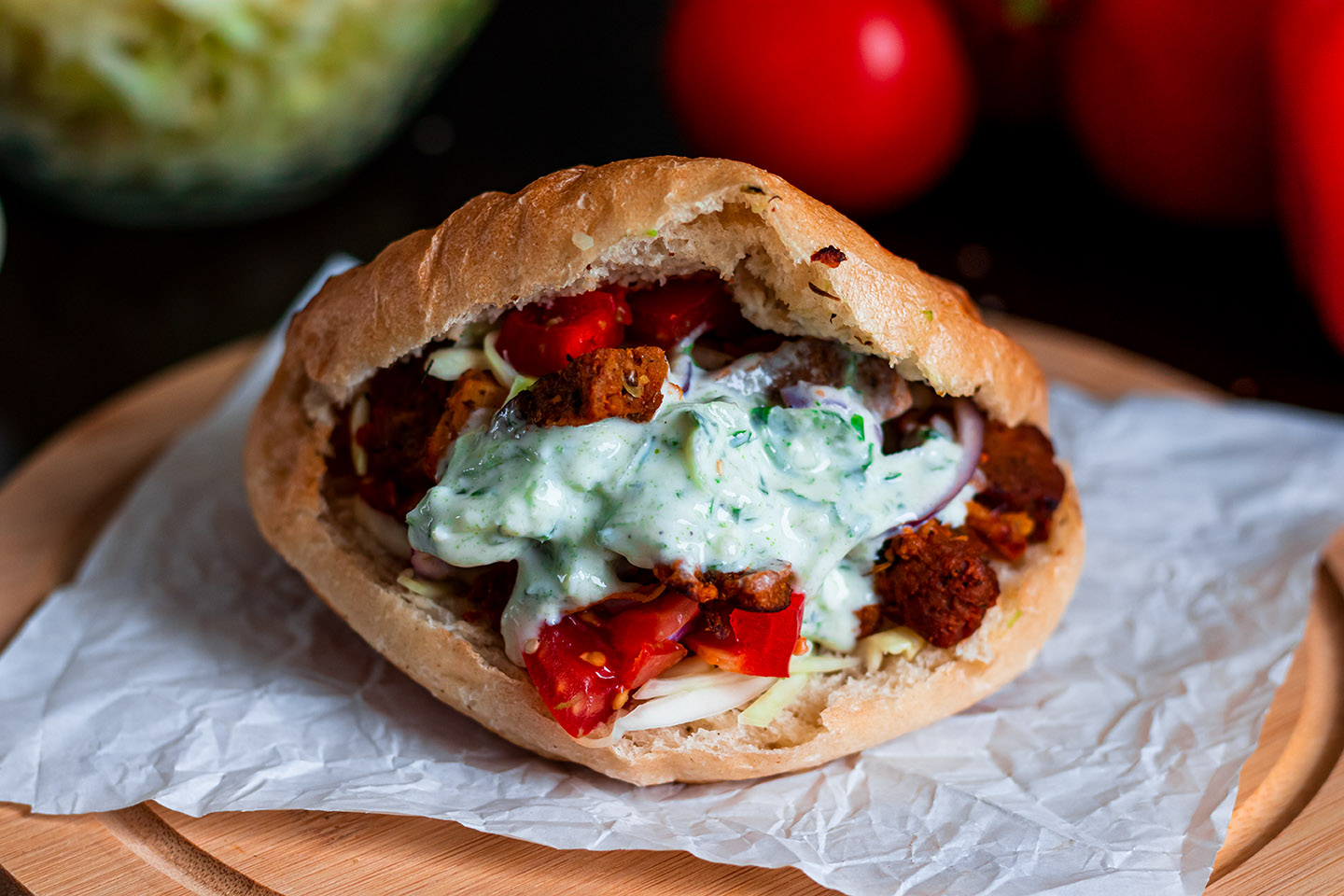 What is seitan anyway? Seitan is pure wheat gluten. Don't worry, it's not unhealthy! Even if the word "gluten" sounds so evil. People who are not gluten intolerant usually don't need to worry about eating seitan. Basically, seitan is obtained by washing starch and bran out of the ground grain and is in the end the sticky substance left over from wheat flour. This is then brought into powder form, which we buy in the supermarket as so-called Seitan Fix and can process further without any complications. Seitan is ideal as a meat substitute for vegetarians and vegans and has a very high protein content - over 25g protein per 100g - and a very low fat content. 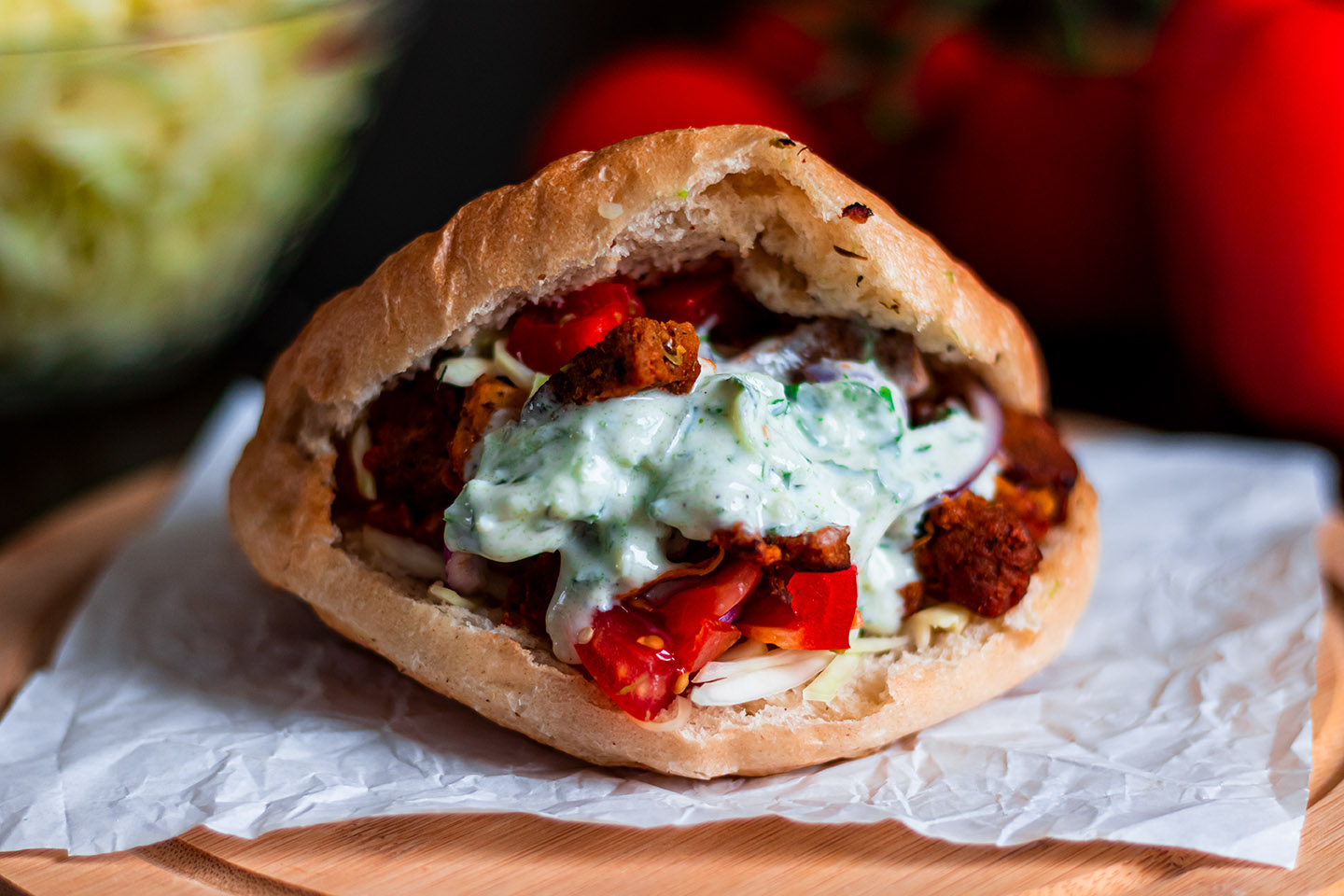 You can use Tsatsiki for this recipe if you like, but other sauces of your choice are also possible. There are no limits to your imagination! Please have a look at my Tsatsiki recipe. It is really fast prepared and is in no way inferior to the original. Vegan for the win! :D 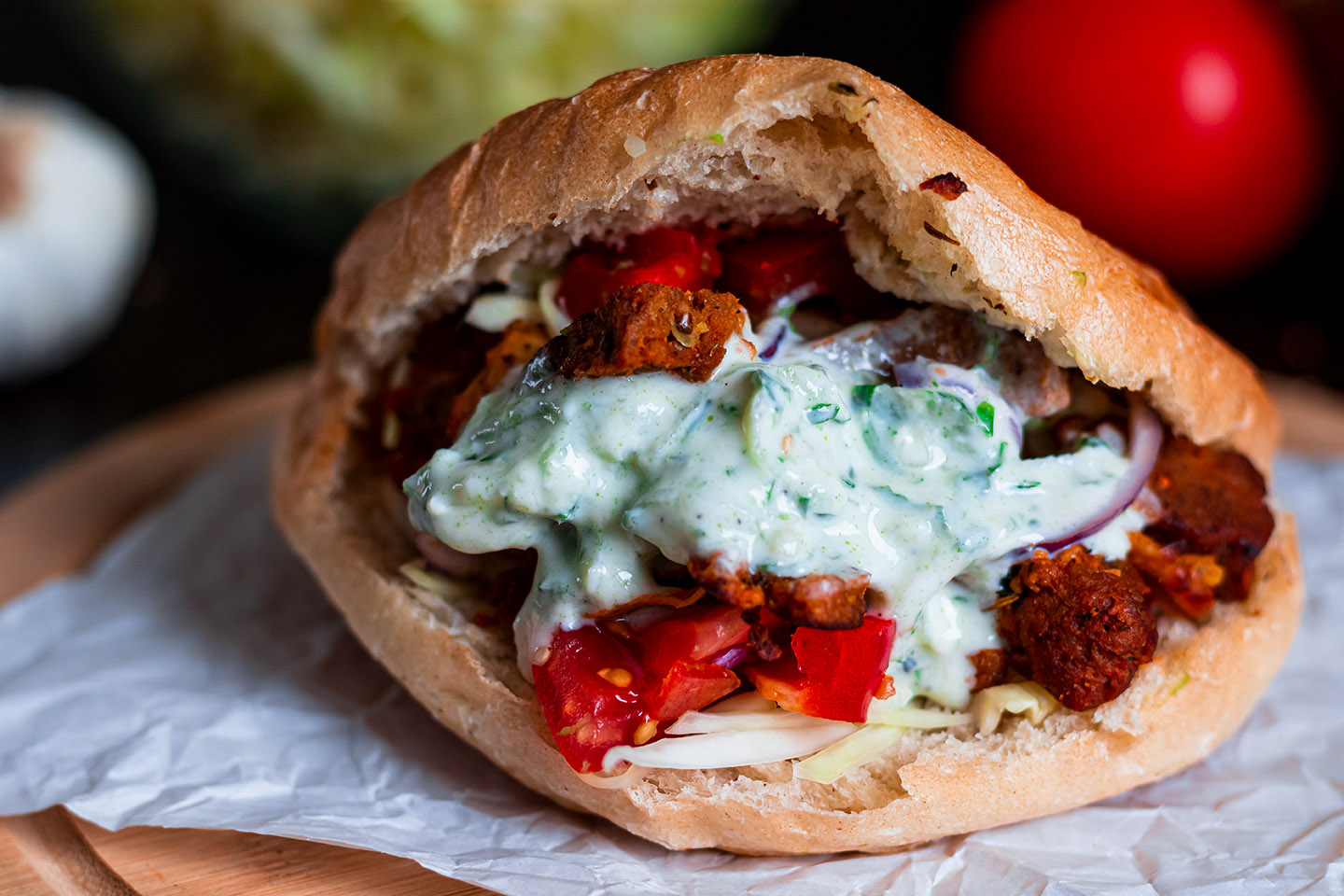 It would be best if you prepare both the seitan and the Tsatsiki one day in advance. So both can be done really well. But this is optional. It tastes incredibly delicious even when prepared at short notice, but a little less intense. By adding the spices to the dry seitan fix powder, the mass also gets a really nice colour and looks surprisingly similar to real gyros. After all, the eye eats along with it.

I bought the pita bread in an Arabic shop. Of course you can also use standard flat bread or make your own pita bread. You can do that without any problems with the Pizza Dough I showed you before.

Vegan kebab doesn't work? It does and that is really more than tasty! This kebab is prepared with Seitan Fix and tastes more than delicious! So the seitan is almost like real gyros. And don't worry, the recipe looks more elaborate than it really is. Basically it is not difficult at all! 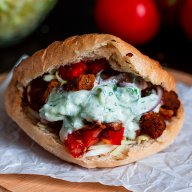 Duration 30 minutes
Ingredients for 3 Kebab
Seitan Base:
Other ingredients:
Preparation
Seitan Base:
Prepare the Kebab:
Remarks
¹ If you do not have a spice mix at home, you can also add a selection of the following spices (depending on what you have): garlic powder, paprika powder, oregano rubbed, rosemary, thyme rubbed, ground coriander, ground cumin, chili powder, marjoram rubbed. Especially paprika is important for the colour.
² It is really important that you not only season the Seitan Fix before cooking it, but also marinate it. That way the mass really gets a lot of taste. Otherwise it can happen very quickly that it becomes tasteless.
Nutritional values for 1 Kebab with Tsatsiki
Calories
705 kcal
Fat
26,2g
Carbs
49,2g
Protein
55,3g 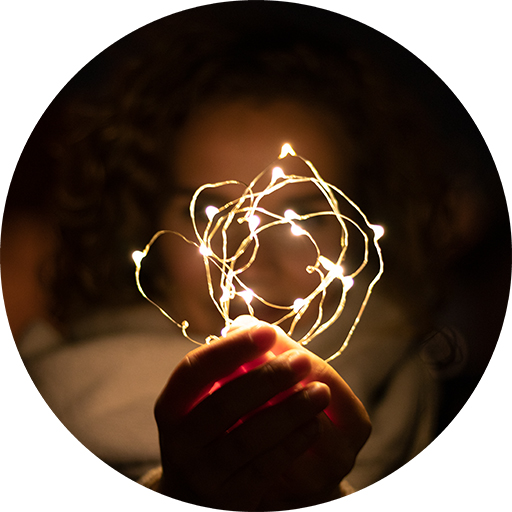 Hello dears!
Glad you came over to my page. I am happy to inspire you with recipes around a vegan diet and a conscious lifestyle.
Because in the end, we all have one thing in common: the love of delicious and healthy food!